This page presents a range of working, Australian and international definitions of intersex.

Intersex people have innate sex characteristics that don’t fit medical and social norms for female or male bodies, and that create risks or experiences of stigma, discrimination and harm.

Sex characteristics are physical features relating to sex, including chromosomes, genitals, gonads, hormones, and other reproductive anatomy, and secondary features that emerge from puberty.

It is worth taking time to recognise that this definition does not specify particular biological characteristics, birth assignment, legal status, gender, gender identity or sexual orientation. Intersex people do not share any identity, we are a very diverse population. Intersex people old enough to freely express an identity can be heterosexual or not, and cisgender (identify with sex assigned at birth) or not. If you’re looking for a word meaning non-intersex, that word is endosex.

Intersex traits include a wide range of different underlying variations. These can be determined prenatally, at birth, during puberty and at other times, such as when trying to conceive a child. Each trait has its own characteristics and differing degrees of expression. The term intersex is best described as an umbrella.

Intersex people are a diverse population with many different intersex traits and other characteristics. Individual people with intersex variations use a variety of different terms, including being intersex, having an intersex variation or condition, having an innate variation of sex characteristics, or naming specific traits. The intersex community comes together to tackle stigma, discrimination and harm, and to celebrate our diverse bodies.

The Australian sociological study deliberately used a generic study title to facilitate questions about the language participants used and where. It identified that people code switch, that is, participants used different language with different types of people. Individuals make decisions about the language they use based on what they know about themselves, the words they are taught by parents or clinicians or others, and experience of stigma and misconceptions. It is important to respect individuals’ choices, while IHRA also takes a position opposing ‘disorders of sex development’, and retconned terms using the same ‘DSD’ acronym, as it inherently disorders intersex traits. 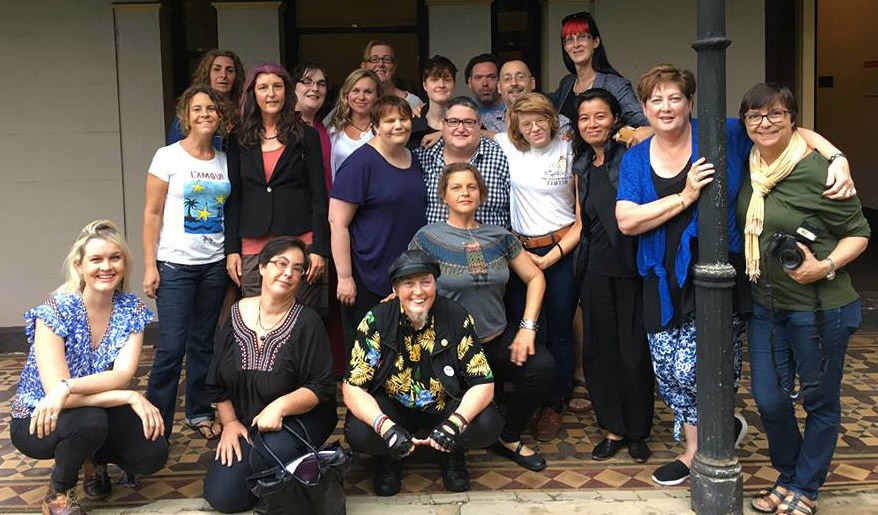 We have discontinued use of earlier definitions of intersex, below.

Our immediate prior recommended definition referred to people “born with” particular sex characteristics. While accurate, reference to birth was often misconstrued as suggesting that intersex people are necessarily identified at birth, and misconstrued as making intersex traits necessarily something related to birth assignment. The new definition is aimed at tackling this narrowed idea of who we are. The reality is that we are a diverse population who discover that we have intersex variations at many different life stages.

An earlier definition was based on the Sex Discrimination Act (Cth). It was discontinued for two reasons. Firstly, because it is primarily based on a model of deficits, what we don’t have, or what we lack, Secondly because, even though it refers to physical features, it has frequently and incorrectly been imputed to mean something about identity or sex classifications:

Intersex people are born with physical, hormonal or genetic features that are neither wholly female nor wholly male; or a combination of female and male; or neither female nor male.

Internationally, definitions have converged in recent years, and shifted towards a model based on human rights law rather than medical definitions. This definition is simply expressed in a 2019 background note on intersex by the Office of the UN High Commissioner for Human Rights:

Intersex is an umbrella term used to describe a wide range of innate bodily variations of sex characteristics.
Intersex people are born with physical sex characteristics (such as sexual anatomy, reproductive organs, hormonal patterns and/or chromosomal patterns) that do not fit typical definitions for male or female bodies

A shorter Fact Sheet with a closely similar definition is available in a number of languages via the Free & Equal campaign.

An umbrella term used to describe people born with sex characteristics (including genitals, gonads and chromosome patterns) that do not fit typical binary notions of male or female bodies.

Earlier definitions include, for example, a definition by the Council of Europe, in a 2013 explanatory memorandum to Resolution 1952 on children’s right to physical integrity:

The term “intersex” refers to atypical and internal and/or external anatomical sexual characteristics, where features usually regarded as male or female may be mixed to some degree. This is a naturally occurring variation in humans and not a medical condition. It is to be distinguished from transsexuality, a phenomenon where someone has an evident sex, but feels as if he or she belongs to the other sex and is therefore ready to undergo a medical intervention altering his or her natural sex.

The term ‘intersex’ refers to people who are born with genetic, hormonal or physical sex characteristics that are not typically ‘male’ or ‘female’. Intersex people have a diversity of bodies and identities.

intersex status means the status of having physical, hormonal or genetic features that are: (a) neither wholly female nor wholly male; or (b) a combination of female and male; or (c) neither female nor male.

Note that this definition deliberately contains no barrier preventing people perceived to be intersex from gaining protection from the law. The definition of “intersex status” is also differentiated from both “sex” and “gender identity”.

2013 Australian Commonwealth guidelines on sex and gender recognition underwent minor revision in 2015. Previously the introduction to the guide stated:

An intersex person may have the biological attributes of both sexes or lack some of the biological attributes considered necessary to be defined as one or the other sex. Intersex is always congenital and can originate from genetic, chromosomal or hormonal variations. Environmental influences such as endocrine disruptors can also play a role in some intersex differences. People who are intersex may identify their gender as male, female or X.

12. The term intersex refers to people who are born with genetic, hormonal or physical sex characteristics that are not typically ‘male’ or ‘female’. Intersex people have a diversity of bodies and gender identities, and may identify as male or female or neither.

This is contradicted somewhat by the definition of ‘X’, a third gender classification, as “Indeterminate/Intersex/Unspecified“. In September 2015, OII Australia, together with the National LGBTI Health Alliance, Transgender Victoria and other organisations formally requested that ‘X’ be redefined as “non-binary” in the guidelines.

The three gender options comprise the full range of options available according to the guidelines, but some intersex people have other identities not covered in the guidelines.

It is important to note that an invitation-only meeting in Chicago in 2006 reported in “Summary of Consensus Statement on Intersex Disorders and Their Management“ coined a controversial new term, “Disorders of Sex Development” aimed at replacing the term intersex in medical settings:

“disorders of sex development” (DSD) is proposed to indicate congenital conditions with atypical development of chromosomal, gonadal, or anatomic sex.

Stated due to “[a]dvances in molecular genetic causes of abnormal sexual development and heightened awareness of the ethical and patient-advocacy issues“, this new language reasserted medical authority in the light of successful intersex activism that identified our issues as human rights, and is strongly contested. It pathologises intersex variations as inherently disordered, and according to Morgan Holmes, “reinstitutionalises clinical power to delineate and silence those marked by the diagnosis“. Intersex Human Rights Australia opposes use of the term DSD because of these factors.

Intersex is defined as a congenital anomaly of the reproductive and sexual system.

If you want a word for “non-intersex”, that word is “endosex”, for “within” or internal to sex characteristic norms. Some people may use the term “dyadic” with the same intent.

This page is not intended as an introduction to intersex.

Give feedback on this page

Was this page helpful? Click on a star to give a rating

We are sorry that this page was not useful for you

Help us improve the information on this page

Tell us how we can improve this page