Documentary filmmaker, Phoebe Hart, comes clean on her journey of self-discovery to embrace her future and reconcile the past shame and family secrecy surrounding her intersex condition. Despite her mother’s outright refusal to be in the film, Phoebe decides she must push on with her quest to resolve her life story and connect with other intersex people on camera. With the help of her sister Bonnie and support from her husband James, she hits the open road and reflects on her youth. 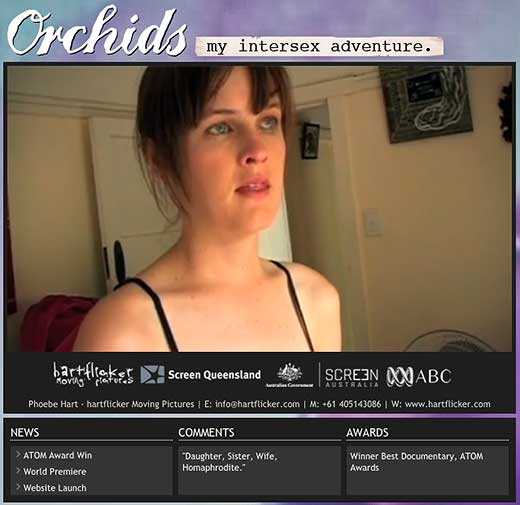 Phoebe’s happy and carefree childhood came to an abrupt end at puberty when she was told she would never menstruate nor have children. But the reasons why were never discussed and the topic was taboo. At the age of 17, Phoebe’s mother felt she was old enough to understand the true nature of her body and the family secret was finally revealed. Phoebe then faced an orchidectomy, invasive surgery to remove her undescended testes, the emotional scars of which are still raw today. Phoebe’s road trip around Australia exposes her to the stories of other intersex people and holds a mirror to her own experience. She learns valuable lessons in resilience and healing but also sees the pervasive impact her condition has on all her relationships.

At home, Phoebe and James want to start a family but dealing with infertility and the stress of the adoption process puts pressure on their marriage. Phoebe also starts to understand the difficult decisions her parents faced and is excited but apprehensive when they eventually agree to be interviewed. Will talking openly with her mother give Phoebe the answers she has been looking for?